You are here: Home / Byte Sized Book of Business Lessons

…is a book that was written by our MD, Colin Durrant on the lessons he has learned while running multiple small businesses in the UK since 1999. It is a very honest account of his journey and well worth a read.

In this easy-to-understand and easy-to-read book, Colin shares his various experiences and lessons of his 19 year (and counting) journey. Colin grew up in Africa where he started his career in marketing and then moved to a large computer company where he began in sales but quickly moved into a technical role and began training in networking and various Microsoft technologies. However, with with the downward spiral of Zimbabwe’s economy, he had to find a way out and get to the UK in early 1999. 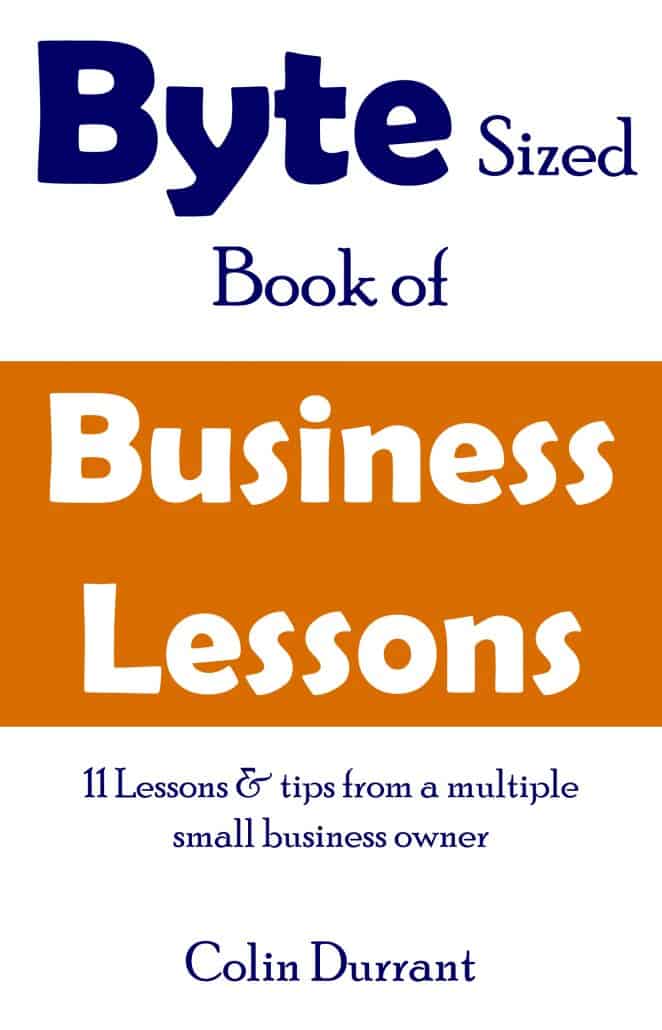 In Jan 2016, he bought Spa Computer Centre, which is a computer company that has been running in Royal Leamington Spa since 1983. This is more of a retail shop so it has been a good learning curve with a different market and dynamic.

He already runs another IT company (www.colins-it.co.uk) that focuses on delivering support to business customers in the UK. Both companies have grown strongly over the last two years. This little book is, essentially, a number of lessons and experiences that I have had along the way from the beginning.

There is a paperback and kindle version available. Please click below;

Colin Durrant was born in Rhodesia and has been competing in triathlons at a high level, for almost 30 years. The determination and focus gained from racing, helping with the endeavours of being a successful business owner. The picture below is where he goes swimming all year round in Stoney Cove. Temperatures drop to around 3 degrees in January, hence the gloves! 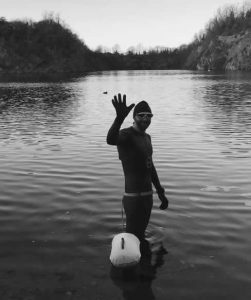 Barbara Parkinson
17:23 29 Jan 20
Spa Computers fitted a new SSD to my laptop to give a much improved performance. The work was done professionally and efficiency. It is so good to have such a trustworthy IT expert in Leamington Spa.

Kim Clements
15:30 22 Jan 20
We have used Spa Computers on several occasions, Colin and his team are friendly, helpful and extremely knowledgeable about all that they do. Not being a 'techie', it's great to be able to ask any questions about any aspects we don't understand. Many thanks 👍

Dean Murden
18:03 14 Dec 19
Great Service. Fixed my Mac over night when I had software problem. Western Computers, where it was bought from, did not want to know. Very professional and very easy to deal with. They have made further recommendations for upgrade and I will be seeing them again in the New Year.

G Quinton
15:39 02 Dec 19
Friendly service and managed to fix my laptop at a good price. I had to take it back again to get the issues fully resolved but happy with the final outcome. It would have been 5 stars if the communication had been completely consistent and reliable. I would use again and do recommend.

Warren Yates
17:42 16 Nov 19
Initially took my iMac back to Western Computers where i bought it from for repair. They refused to look at it due to its age! Popped into Sap Computers and left it with them for a few days and its back as good as new. In fact better than new with a hard drive upgrade. Really good value and very friendly service. Highly recommended.

sonnytube
17:12 14 Nov 19
Excellent service from Colin and his team. They managed not only to fix my computer but also save years of work. Would definitely recommend 10 out of 10 👍

yeniths .
23:42 08 Nov 19
Took over a month to get my computer back to me and after all that it wasn't even fixed. Not sure what took so long if nothing was getting sorted. I only ever had updated about my PC after phoning and after each time I was pretty much told to wait

Anthony Tuckwell
09:51 21 Aug 19
The staff at Spa Computers are extremely knowledgable, reliable, and provide an exceptionally friendly and supportive service. I'm on a long-term home-support contract with them and I very much enjoy going into their offices to chat about all things computers. My laptop (and myself) have greatly benefited as a result! Thank you Spa Computers!

Estelle Seymour
09:25 09 Aug 19
Very helpful and kept me informed at all stages. So relieved that they resurrected my apparently dead computer and retrieved my data. Highly recommended.

Carol Withoutane
09:10 07 Aug 19
I needed to replace my ancient laptop, the guys at Spa were very patient explaining all the options and I am very pleased with my purchase after listening to their advice. They also copied across all my files and emails, something that was very important to me. I wouldn't hesitate to use them again if the need arose.

Conor Boyle
20:49 25 Jul 19
Couple weeks ago the power pack for my xbox system burned out I couldn't think of anywhere to go to except spa computers I arrived explained the problem and they knew exactly how to solve it. Within ten minutes everything was done they promised my part would arrive in two days and it was on time so can't complain there. Nice staff who know what they are doing which is great

Tori Keene
17:30 22 Jul 19
Spa Computers are fantastic! After being given an extortionate quote from another local retailer to fix my laptop I went to spa computers who quickly identified that the problem was much smaller (and less expensive) to fix than I had been told. They went above and beyond and I would recommend their services to anyone. Thank you so much!

Carol
17:48 19 Jul 19
So pleased that my daughter introduced me to you, I asked for photographs to be transferred from my broken hard drive and so pleased you were able to do so. I purchased a new laptop from you and I am so happy with it. So it’s a big thank you from me

Daniel James
10:44 03 Jun 19
Loved it! Worked with a great bloke called Claudio. He got the job done quickly and for a solid price.

Buttmutha
09:29 22 May 19
My computer crashed and these guys rescued the hard drive on the same day within an hour. Saved my life. And at a reasonable cost too.

Barbara O'Shea
14:52 11 Feb 19
Bought new computer and screen on which they downloaded information from old one. Very pleased with that service and they also came and installed it for us. All of which would have given them a five star rating. But their internal communication needs to be improved. Pity a few tweaks and they would be there.

John Hones
14:41 13 Dec 18
I've recently moved my company from Banbury to Leamington and needed a reliable and experienced computer repair company to fix our laptops as and when required. Colin and his team at Spa Computers ticked all the boxes! Professional, helpful and fast service every time. Highly recommended!

Hazel Robbins
13:21 13 Dec 18
Spa Computers have brilliantly sorted both of our laptops. Their professionalism and knowledge is great. They keep you posted about what is needed and how much this game will cost. Very friendly. Definitely use them!!!

Martin Grahame-Dunn
13:10 13 Dec 18
What a superb service from the team. Communication was easy and effective. The repair, Professionally handled and as a result, they now have a customer for the foreseeable future. Thank you!

Christian Paynton
12:03 15 Jan 18
A Gem of a Business! These guys couldn't be more helpful. Easy to deal with, quick to respond and resolve, good value service and genuinely nice. Thanks Guys Happy New Year

Adrian Wilson
16:44 27 Dec 17
Very helpful, down-to-earth staff with fair policies and prices; went in for a laptop assessment/repair and they were very open and honest with options and prices, keeping me fully informed throughout. They were unable to repair my water-damaged laptop but did manage to save all of my data and transfer it onto a caddy, and everything was resolved within the hour I paid for. I'm very happy with the service I received and highly recommend this company.

Kath Coltman
19:42 19 Dec 17
This very friendly place looked at my printer for me. They sent away for parts, fitted them but because the machine still didn't work sent the original part back and replaced it to ensure it worked. They kept me informed at all stages of the process and their charge was really good. Very competitive rates and great service

Ralph Edwards
15:25 19 Dec 17
As a small business that depends on computer technology, having the team at Spa Computers at the end of the 'phone gives us real peace of mind. Not only are they able to respond to questions when we ask and, importantly, help us to understand the answers, they have also steered us through upgrades and additions that we have recently made. Very happy and impressed.

Marianne Brak
23:52 30 Nov 17
Fantastic local computer shop. Great expertise, very helpful and friendly guys. Have been several times, first to get a laptop fixed, then bought a new one, and they transferred all my files over etc. Contacted them recently as my printer was playing up and they managed to solve it remotely. They are always happy to help even with the smallest issues. Highly recommended!
Next Reviews

Ask us a question